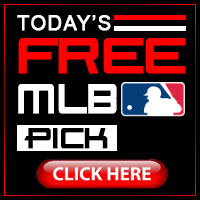 Marlins at Red Sox—MLB pick is Miami Marlins and Boston Red Sox to play under the total of 8.5 runs. Starting for Miami will be Pablo Lopez. The righthander is in good form allowing two earned runs or fewer in four straight and eight of their past nine games. Nick Pivetta counters for the Red Sox. He held the Astros in his last start to two runs and three hits over six innings. Pivetta has 26 strikeouts in his past 17 innings. Past ten games Marlins batting .192 against righthanders. Red Sox .231 as a team. Both bullpens have performed well. Play Miami and Red Sox under 8.5.

Royals at Angels—MLB free pick is Kansas City Royals +122 odds. On the mound for LA will be Dylan Bundy. The righthander in his past three starts has allowed fifteen earned runs in 12 innings of work. In his five starts Bundy has an ERA near eight. KC is expected to start Jackson Kowar. The prospect has put up great numbers in the minors. In six Triple A starts Kower has an ERA of 0.85 and strikeout rate of 34% Past ten games Angels hitting .230 against rigthanders. Royals outperforming the Angels in that period at the plate and bullpen with an ERA of 2.56 as teams batting .158 on this unit. Play Kansas City +122.

Cubs at Padres—Free pick is Chicago Cubs +115. On the hill for Chicago will be Adbert Alzolay. The righthander in his past three starts has allowed three earned runs in 17 2/3rd innings of work. Ryan Weathers counters for the Padres. He faced the Cubs six days ago allowing four earned runs with two homers in five innings in defeat. Chicago has won 13 of 17 against lefthanded starters averaging 6.1 runs per game. Padres have lost two straight and six of eight after their 6-2 defeat to the Mets. Past ten games Padres hitting only .218 as a team with the Cubs bullpen ERA of 1.82 with WHIP of 1.03. Play Chicago +115.